Yesterday afternoon I had the pleasure of shooting in Prescott with Rubi Vega and my buddy Julio. To see how it all went down keep reading… 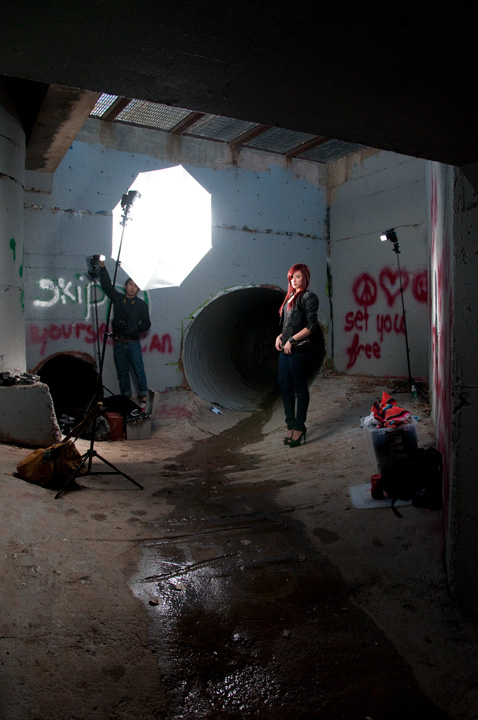 Here is a set-up shot from the shoot on Sunday. We did a few looks at this location, unfortunately i only remembered to take one set-up shot at the last spot. We shot inside the tunnel in the background as well as the left corner of the room. The set-up is two Vivitar HV-285’s with DIY spot-grids as rim lights, one Nikon SB-600 into a Westcott 43″ double folding shoot-through umbrella as the key, and a fair amount of ambient coming through the grate that creates the roof of the graffiti room.

Saturday afternoon I was working at the restaurant and found out that a friend/co-worker was going to Prescott that afternoon. I have been feeling un-motivated/un-creative so i figured that getting out of Flagstaff for a day or so would be a good remedy. I called a photographer/all-around-creative-type friend of mine, Julio, about 3:30pm and told him that i was coming and to see if he could line up a model for us to do a photo shoot on Sunday. He said he thought he could and would try. I have heard of this place for many years as somewhere people went to practice graffiti art and probably drink beer and whatever. I always thought it would be a great location for a shoot, Julio knew where to find it and has shot there before.

On Sunday afternoon i met Julio and we drove to the spot, about two minutes from downtown Prescott, where we met Rubi, the girl Julio lined up to model. She had a mutual friend with Julio and had modeled for one of his photo classes at Yavapai College in Prescott, so she was willing and kind enough to show up on almost no notice.

Getting into the ‘graffiti room’ as not all that easy and Rubi was a trooper. Walking down a steep embankment into a dry but muddy creek and into a 10’x8′ tunnel that was about an inch deep in water and stinky mud, walked to the end about 100′ back and into the room shown above, she did it in heels. Unfortunately someone, probably a city employee, painted over the walls with some kind of ship gray paint. I am sure the intention was to stop the spray painting, but in reality it probably just re-set the canvas, and some people had begun to add new stuff, but it didn’t live up to it’s glory days of floor to ceiling spray paint.

in the mean time check out one of my favorite youtube videos here…http://www.youtube.com/watch?v=ykwqXuMPsoc

This entry was posted in photography and tagged arizona, behind the scenes, capstone, photography, prescott. Bookmark the permalink.